Following a synthetic process we end up with a building complex shaped like a folium that bridges the two land elevations at the west/east axis of the plot creating a big open space, a courtyard in the middle of the site thus utilizing maximum north-south orientation, much required for the classrooms.

Principles for the new School Complex

A brief Description of the building

Emphasizing mostly on the increased cooling needs of the school (Climatic Zone A for Greece), wide cuts on the building volume will ensure the adequate air- ow from the north and north west during the hot months. The school complex height decreases towards the north following the land slope allowing the prevailing winds to enter the central courtyard of the school and pass through the rest of the complex as much as possible. The spaces occur in the continuity of a curved perspective with classrooms clustered into single building volumes facing mostly north/south, while the rest of the spaces get arranged under and close to the “curved canopy” and the sheltered courtyards.

Description of the building

The school complex is arranged as a uni ed whole with distinct boundaries for each educational level. Primary and Secondary Schools along with the main Administration building are attached and accessed by the main municipal road (east side) for direct and easy access while the kindergarten is located at the most western part of the site. Retaining stone walls hold existing slope ground and form site boundaries on the south and west sides of the site. Atriums and roof cuts along with various building units create semi-sheltered well lit spaces for exible use. 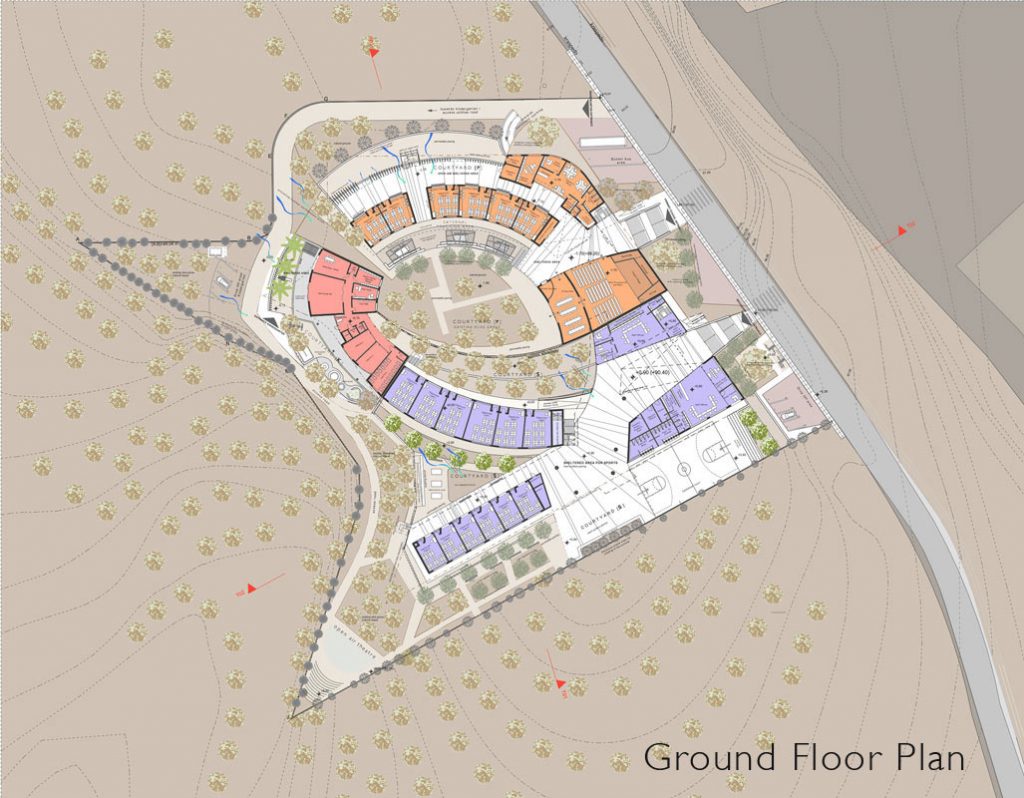 The Kindergarten is located at the western side of the plot and is only attached to the Secondary School volume. One can access the kindergarten from the lowest part of the site from the municipal road and the perimetry access road at the western side of the plot, where a small drop-off area for cars is found. Its position was chosen mainly because it is bound to have a smaller number of visitors (children & parents) and operate in a tighter schedule than other schools. The entrance and reception area are central to the kindergarten building volume. At the north side, the dining room, multi-purpose hall and head teacher of ce are situated, while at the southern side the 2 classrooms and the quiet room are located.
A wide roof-overhang canopy with several cuts for light penetration protects the yard, which is leveled lower than the rest of the western part of the site in order to be protected from possibly strong western winds during the winter period. 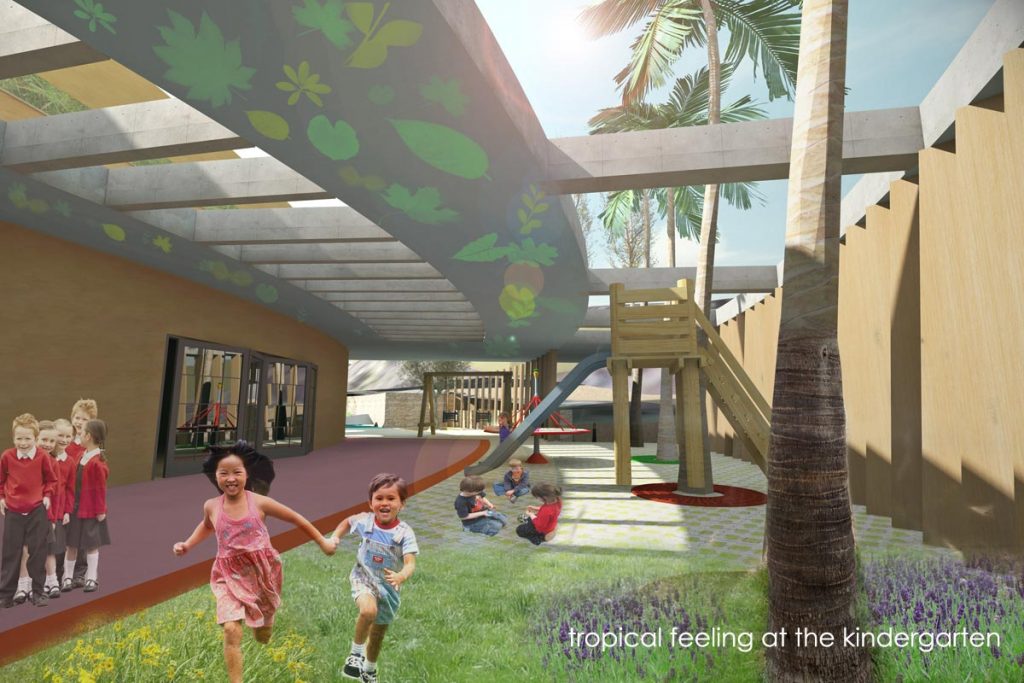 The primary school is attached to the Secondary school on the east side and it is comprised of 3 separate building volumes laid in two levels.

A green roof garden with citrus trees protects the special classrooms from the west summer sun. There is a variation of schoolyards of different sizes, orientation, oor nish and vegetation so that children can have several options according to the weather and the activity, etc.
A colorful (like rainbow) metal structure “holds” the northern side of the big volume, where a passive cooling screen has been incorporated. The northern sheltered courtyard of 14 meters width, is protected from the northern winds with windbreaks/ plant hedges (shrubs, trees) set far from the building. In this manner, air ow is relatively controlled providing the northern schoolyard with a relative calm. Dense low shrubs along with tall trees (e.g. poplar trees) that do not have a very dense foliage, will act as an open barrier, will not stop the wind but reduce turbulence and create a broader zone of calm at the ground oor yard. At north, on the second level, movable translucent glass partitions will act as windbreaks and prevent strong winds during the winter from entering into the class, through the opening of the main doors. 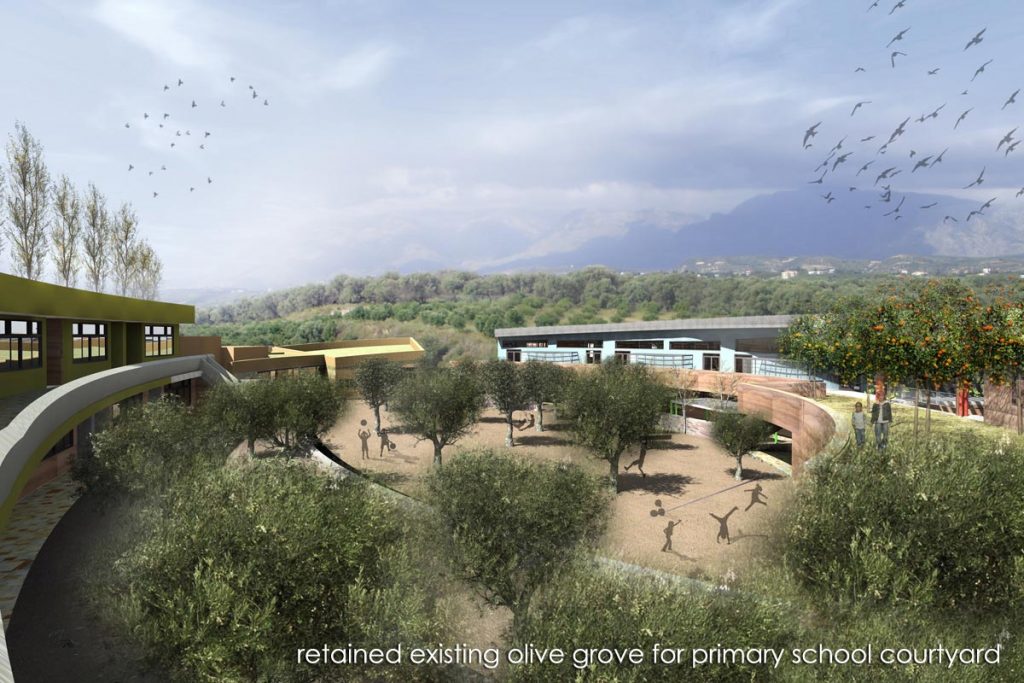 The Secondary school develops on two levels and is comprised of four building volumes creating open areas mostly covered in-between of the volumes. The two building volumes axis are set at an angle of about 30o between them and a 0.90 m oor level difference, so that daylight reaches all classrooms and shading each other is avoided. 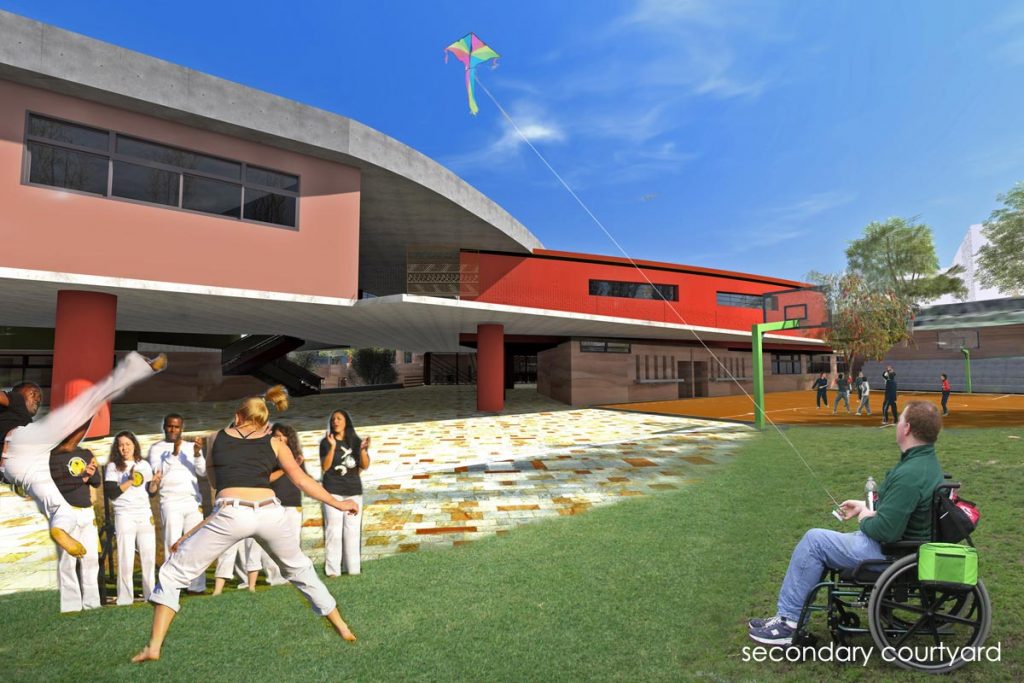 External walls
Low-energy architectural solutions according to the traditional principles in the Mediterranean area are: creation of thermal mass and natural ventilation combined with passive cooling techniques and sun shading to cope with high summer temperatures.
Walls have the biggest effect on a building’s overall environmental impact. They are also responsible for most of the heat loss. Walls can have from a low to a very high intrinsic energy embodiment, depending on the amount of energy it takes to make and transport the materials used.
Moreover the breathability of the walls is very important as breathable walls can help to offset the highs and lows of humidity caused by users, helping to promote a healthy internal environment. High thermal mass, breathable wall construction will be used for the new school complex.

Almost all ground oor walls are made of rammed earth (big thermal mass) while the rest of the exterior walls will be double wthe masonry walls made of high energy ef cient hollow bricks combining insulation, thermal mass and anti-seismic characteristics in one material, suitable of being used in long span reinforced concrete structure.

It is constructed by compressing a damp mixture of earth that has suitable proportions of sand, gravel, clay (from the site or within close proximity), cement and an added stabilizer (cement emulsion), into an externally supported frame or mould, creating either a solid wall of earth or individual blocks 5. Colored oxides or other items, such as bottles, or pieces of timber can be added to the structure.
The numerous advantages of building with rammed earth are:
• high thermal mass and superior insulation (reduces the need for air conditioning and heating)
• re proo ng
• strength and durability (load bearing)
• minimal environmental impact
• low cost
• low maintenance
• where soil excavated in preparing the building’s foundation can be used, the cost and energy
consumption for transportation are minimal
• minimum skilled labor & fast construction
• no need for paint or other toxic nishes
• pest deterrence (no wall cavities) 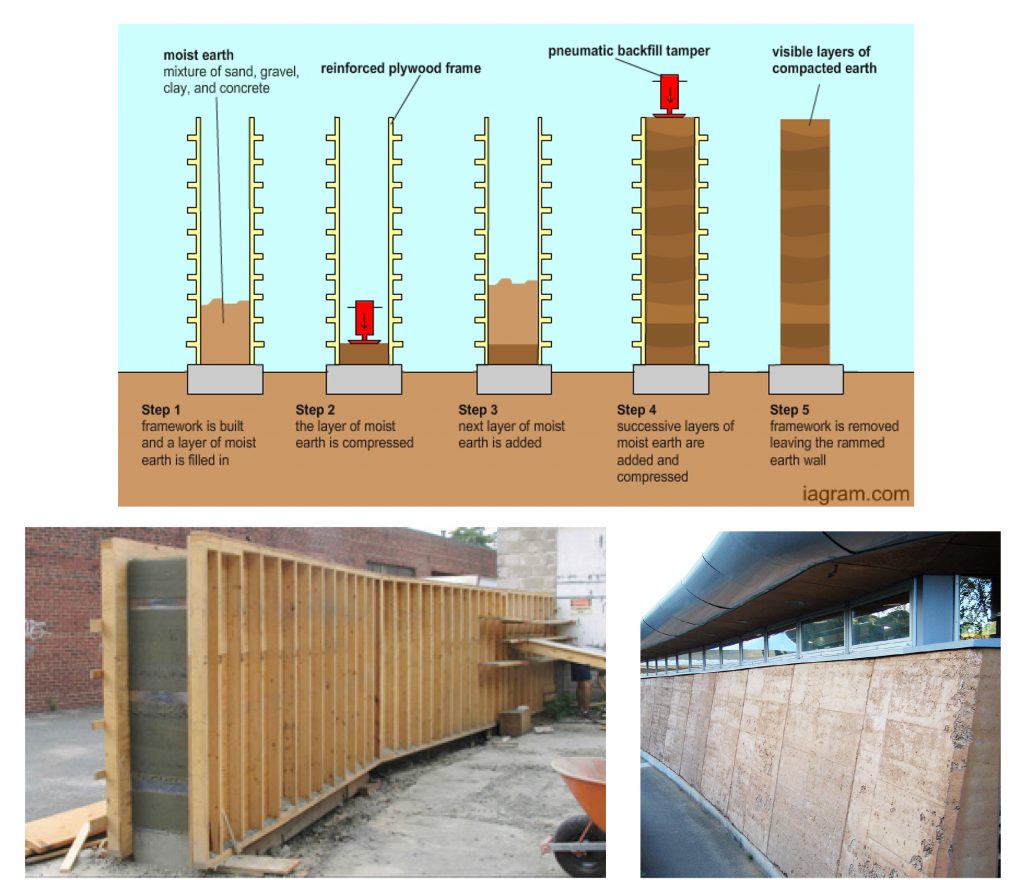 Placing the main building volumes of the Primary and Secondary schools vertical to the north-south axis has maximized the use of daylighting and passive solar gain. Pergolas and shading systems are extensively placed on all southern and western facades to protect the building from overheating during the summer. Low and high deciduous vegetation will add to the optimum use of the sun and provide evaporative cooling during hot months.
External walls have a high thermal mass in order to store heat in the body of the material, the construction mass of the building itself – thermal mass. This is achieved by using high heat capacity materials such as rammed earth, brick and poured concrete. This has possitive effects for indoor conditions during both the summer and the winter. The high solar gain during the day is stored as energy inside the material and it is gradually released indoors later on. In winter it is released into the room during late afternoon /evening hours and indoor temperature increases. This time lag of heat release is ideal for spaces that are unoccupied during the night and indoor temperature is relatively low. In the summer when the heat is released, open windows for cross ventilation will ensure decreasing the temperature signi cantly. 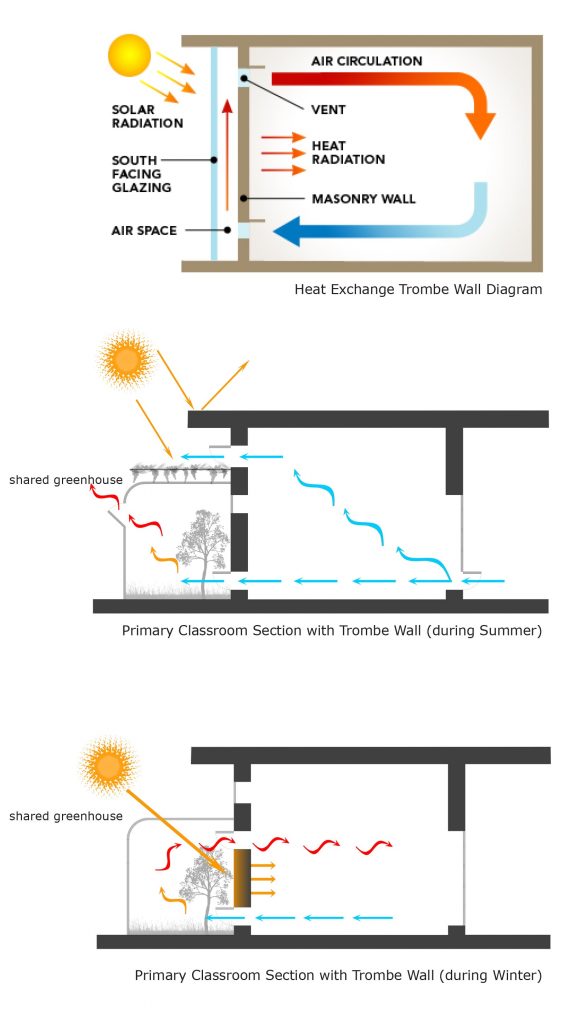 • Shading pergolas with deciduous climbing trees on the south side of the classrooms
• A roof overhang of at least 1 meter to protect from the high-angle summer sun but allow the low-
angle winter sun to warm up the building
• Deciduous trees along the main volumes at a right distance (west – south)
• Small greenhouse units attached to the building will work with the thermal walls (1st level of Primary
School). Vegetation will further shade the building in the summer
• In the winter the sun will hit the trombe wall that heats up the classroom
• Very light colors will be used for painting most of the interior of the classrooms while all ceilings will
be painted white to re ect light appropriately
Additional lighting shelves can be added to the south openings side and the ceiling to bring more ambient light into the space.

The entire school roof has been designed for the collection of rainwater. The rainwater collected from hard surfaced roofs and other impermeable surfaces is stored in rainwater tanks and will be used for toilet ushing together with recycled greywater. On the other hand, in order to minimise the required treatment, rainwater collected from green roofs is going to be used solely for outside uses and irrigation, an ideal water source for plants as the collected stormwater will be enriched with nutrients.

Since rainfall in the area is considerably low a combined rainwater and greywater recycling system is proposed for the development, as greywater is considered a more reliable water supply source. The greywater recycling system is going to be used in conjunction with rainwater for non-potable uses, such as toilet ushing and outdoor uses, in order to reduce the demand for potable water. Greywater that is going to be collected from hand basins, showers and washing machines will be treated and stored before distributed. In order to facilitate greywater recycling buildings are going to be tted with a dual plumbing system for the different water sources (potable water / recycled greywater) and water discharges (greywater / blackwater). 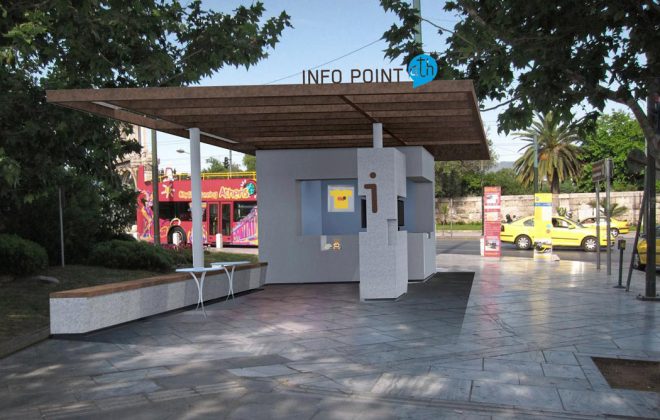 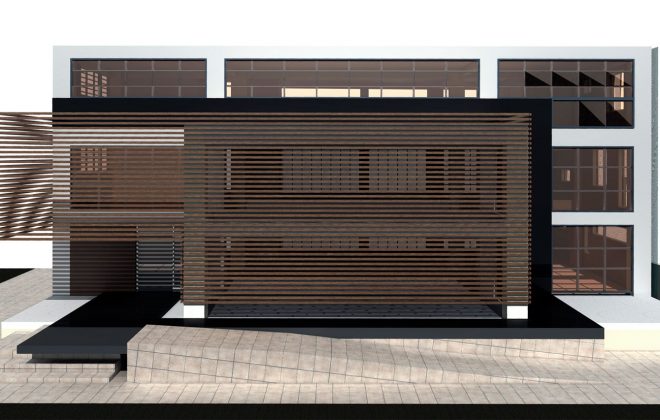 Commissioned by Vernicos Yachts S.A. to finish of an existing building that was left in… 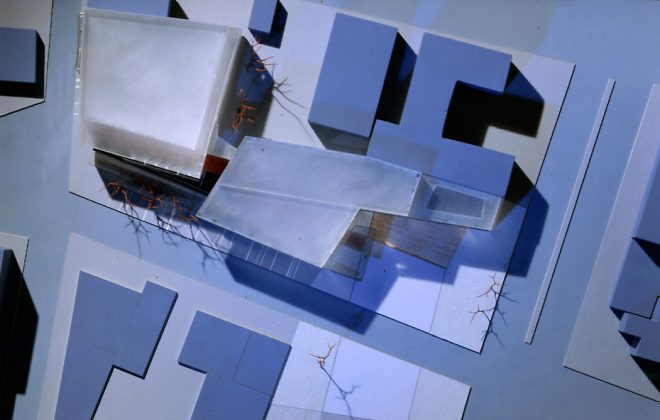 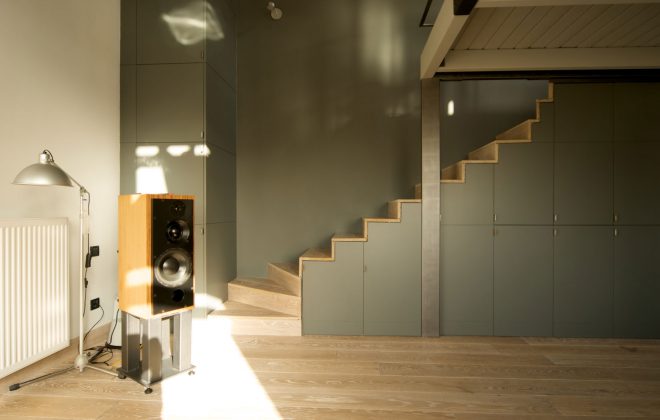